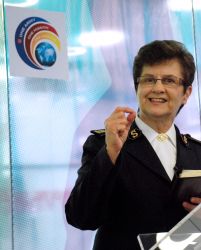 GENERAL Linda Bond made a passionate call for The Salvation Army around the world to be united in mission and message and to grasp new opportunities as she launched the International Vision: One Army, One Mission, One Message.

The vision is given substance through 12 Mission Priorities – full details of which can be seen in the Vision Plan (http://sar.my/one). These priorities call on Salvationists to say 'we will' to principles such as deepening spiritual life; reaching and involving youth and children; and communicating Christ unashamedly. The General said she was aware that, if not approached practically, a vision could be 'only a pipe dream' but that the Mission Priorities make it clear that 'you have to do something'.

She emphasised that One Army, One Mission, One Message should not be seen as 'the General's vision' but that she wants Salvationists around the world – who she described as having 'the DNA of The Salvation Army tattooed on heads and hearts' – to say: 'This is our vision'.

'As General I need to own the world's priorities,' she told a packed meeting room at International Headquarters (IHQ) in London. She committed IHQ to 'owning' the Mission Priorities and explained that the final wording had come about after extensive consultation with Salvation Army leaders around the world.

The General spoke to Salvationists around the world when, referring to the biblical promise that God would care for his people, she said: 'I truly believe Salvationists need to know we have a hope and a future.' Her words were being recorded on camera before being made available online (http://sar.my/one).

The General told the congregation that in order to be 'One Army', The Salvation Army 'needs to be marked by holiness and prayer'. She took this point further: 'People should look at us and say: "Here is a holy people of God – a people with a passion for the gospel."'

She called on Salvationists to see self-denial – sacrificial giving to the Army's world mission – as a vital part of their service. She spoke of the willingness she sees by people from poorer countries to help even those who have greater resources, saying: 'We need each other – we need each other's money!'

Moving on to the next aspect of the vision, the General reaffirmed the importance of The Salvation Army's integrated mission, saying that it 'has to be emphasised again and again and again'.

The vision statement speaks about going 'into the world of the broken, lonely, dispossessed and lost, reaching them in love by all means'. The General sought to ensure that this was understood fully, explaining that the broken and lost could refer to people in physical and financial need but that it could just as easily describe 'the unsaved and people who are outside the fellowship'.

She explained further that the Army must not hand over its 'service to suffering humanity' to its social services; nor could it leave it to the officer training colleges to do all the work to grow saints within the Army.

She had a clear message for corps, social service centres and headquarters everywhere: 'If there is a Salvation Army shield on your building, you do all the mission!'

The General was equally clear about the Mission Priority to reach and involve youth and children. 'The future of The Salvation Army,' she said, 'may hang on the priority to which we give our approach to children and youth.' She said that work with young people should not be ignored because of a perceived lack of time or resources, and she committed IHQ to involve young people in its public meetings.

Speaking about the Mission Priority to 'stand for and serve the marginalised', she challenged her listeners by saying that The Salvation Army needs to 'find its voice and stand for people who are marginalised in society,' explaining that the Army is 'married' to such people.

Innovation in mission, said the General, is to be encouraged. 'Just go for it and give us good ideas,' was her call to the Army. She backed this up – despite admitting to being naturally conservative – with a call for Salvation Army boards to have a 'can-do' attitude such that their natural response to ideas should be 'yes' (unless there was good reason to say 'no'!) rather than being over-careful and instinctively negative.

The General admitted that in parts of the world where The Salvation Army is adored by the public there is a danger that 'we wouldn't want to jeopardise it by being politically incorrect'. She said that the Army should always make clear that it does its work because 'the love of Christ compels us', adding that she would love to see that phrase on the wall of every Salvation Army social centre. Taking a strong stand on its motivation may mean that the Army sometimes loses money, admitted the General, before adding: 'But I would rather have the blessing of the Lord.'

Picking up on another of the Mission Priorities, the General called for a reaffirmation of the belief in transformation, explaining that – through the power of the Holy Spirit – a person can change his or her life not by making resolutions but by undergoing a revolution!

Communication was highlighted as a priority. The General said that she loved Salvation Army open-air meetings but warned against holding them 'next to a brick wall' where no one was listening. She called on Salvationists to grab the opportunities presented by modern technology. 'We need to use the World Wide Web,' she said. 'We could have a million people at our open-air meetings!'

Drawing her thoughts to a close, the General admitted that there was nothing inherently new in the International Vision. However, holding up her Bible, she told the congregation and those watching online that from Genesis to Revelation there was a common thread – 'God's relentless pursuit of relationship with humanity.'

The General wondered what Salvation Army Founder William Booth would think of the International Vision, concluding that he would probably say: 'Go and do something about it!'

'I want you to be encouraged,' said the General to Salvationists at IHQ and around the world. 'I believe God raised up The Salvation Army.' And while the International Vision contains 'nothing new', she hopes that it creates opportunity for Salvationists everywhere to look at what they say and do so they will 'use new language and find new ways of doing it'.

THE meeting also included the launch of a new book, Love – Right at the Heart by Commissioner Robert Street, published by Salvation Books. The book, written to work in harmony with the International Vision, examines how Salvationists have a responsibility to one another, while taking their caring ministry to the world. The General said she hopes all Salvationists will read the book.

A new song, 'As I Have Loved You', has been released to accompany the book. A recording of the song, sheet music and a backing track are available online at http://sar.my/aihly

Love – Right at the Heart costs £3.50 (plus postage and packing: £0.90 in the UK/£2.32 in the EU/£2.89 rest of the world). To order a copy, send a cheque made out to 'The Salvation Army' to: 'Love – Right at the Heart', Communications Section, The Salvation Army International Headquarters, London EC4V 4EH, United Kingdom. Copies will also be available through amazon.co.uk and from territorial trade/publishing departments, though prices may vary.

This release is also available through the News section of www.salvationarmy.org.