The General in Latvia 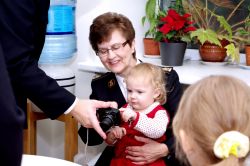 The General Offers Challenge and Encouragement in Latvia

The Salvationists of Latvia had great joy in welcoming General Linda Bond to their country, which is part of The Salvation Army's Sweden and Latvia Territory. The General was accompanied by Europe Zone leaders Commissioners Robert and Janet Street (International Headquarters).

People travelled from across Latvia to Riga for the Sunday morning meeting. The service included two testimonies. Cadet Liene Lazdina spoke of how her plans had changed when Jesus came into her life. She admitted that she could never have dreamed that she would become a Salvation Army officer-cadet. Lieutenant Sarah Ilsters spoke about ‘waking up’ and being more aware of people who need to be saved. 'We are The Salvation Army!' she said.

The General spoke with clarity about the message of Jesus being the same message that The Salvation Army should proclaim today. She stressed that, while there is a lot of darkness in the world – addictions, slavery, despair, hopelessness, death – the darkness cannot overcome the Light which is Jesus Christ.

People streamed forward at the end of the message to pray at the mercy seat.

Worship in the afternoon meeting was enhanced by a choir from Bauska Corps and the Riga 1 Corps Worship Group. Both groups helped the congregation enter the presence of God.

In her testimony, Candidate Vineta Vanaga shared her question to God: ‘Why did you leave it so late to call me?’ She declared that she is willing to give everything to God and follow him wherever he leads. Cadet Janis Sporans spoke of how God had called him from his old life – he was often to be found drinking in pubs – to bring the message of Jesus to people who still do the things he used to do.

The weekend visit had begun with officers councils on Saturday evening, led by the General. The theme was 'One Army'.

There was a special opportunity for the young people of Latvia to meet with the General and the zonal leaders in an informal ‘Open Microphone’ gathering in the evening.

Commissioners Robert and Janet Street talked about youth in Europe, highlighting the fact that there is an increased number of cadets in various parts of Europe. They also discussed requests for a European Youth Congress. The General was asked about her impressions of Latvia. She told the young people that she was impressed by The Salvation Army's history in the country – particularly the 'heroes' who had kept the spirit of the Army alive during the years of communism. She expressed her belief that God is blessing the Army in Latvia with revival today because of the faithfulness and prayers of these heroes.

The Latvian Salvationists of today are praying that there will be even more blessings to come.

This release is available through the News section of http://www.salvationist.org/(click on name to access)