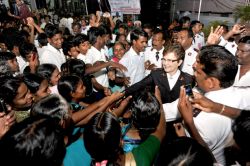 Spectacular decorations and large, excited crowds greeted General Linda Bond during her visit to The Salvation Army's India South Eastern Territory. However, what will long stay in the minds and hearts of those who were present is the spiritual impact of the visit, with many people dedicating or rededicating their lives to God.

The General, Captain Elizabeth Nelson (International Headquarters) and territorial leaders Commissioners M. C. and Susamma James were transported to the Booth Tucker Memorial Church, Nagercoil, in a motorised golden chariot. An estimated 25,000 people gathered to see the international leader, and the chariot processed slowly through the happy, tightly-packed throng to shouts of 'hallelujah!'. The presence of the local police, who ensured the large number of people were safe, was much appreciated by the territorial leadership.

When the procession reached the church grounds the General told the crowd: 'You are very kind. I am honoured to be your General. Together we are the beloved of God – we are his children.'

A public meeting in the evening began with a welcome song sung by Booth Tucker Memorial Church Choir. Senior representatives from Indian churches brought greetings and words of welcome. A highlight of the meeting was the tambourine dance and music of junior soldiers from Saithammalpuram Corps, Valliyoor Division.

In her Bible message the General emphasised the importance of prayer. She told the congregation that 'without prayer the church cannot go forward' and spoke of how the Worldwide Prayer Meeting – which sees Salvationists from around the world committing to prayer every Thursday morning – is bringing a great change in the Army world.

She also talked about the importance of holiness, telling the crowd: 'God’s hope is with us ... don’t be afraid to be filled with the love of God. To serve God is a sheer joy – you are cleansed, you are blessed by the Spirit.'

After the Bible message, while the congregation sang 'All to Jesus I Surrender', scores of people rushed to the mercy seat with tears streaming down their faces.

The following day (Wednesday) the Booth Tucker Memorial Church reverberated with claps and hallelujahs from 500 active and retired officers of the territory who gathered for councils.

The General offered special thanks to the retired officers who had worked so hard for 'the foundation of the Army'. She explained the 'One Mission' referred to in The Salvation Army's International Vision and lifted up the officers of the territory to God in prayer. Many officers moved to the mercy seat to rededicate their lives to the mission which God has given The Salvation Army.

In the second session the General challenged the congregation to check that their officership is under the control of Christ's lordship.

On Thursday the General attended a gathering of 2,200 self-help group members, who have been assisted through the territory's enterprise and microcredit schemes. The General told the women she was proud of their achievements but added: 'My prayer for you is that you will know Jesus.'

Many members of the congregation knelt at the mercy seat after the Bible message. Others showed their dedication to God by standing.

Self-help group members presented a skit and some cultural music items before the work of the groups was illustrated through two testimonies. 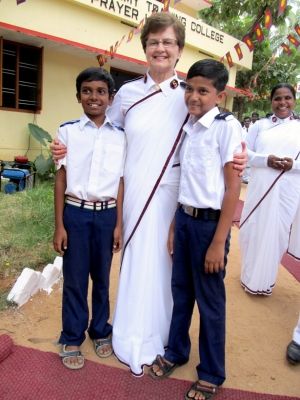 Mrs Saroja from Chittadathuvilai explained that she had struggled to afford to send her children to school. A loan from her local self-help group made a huge difference to her and her children. She told the General and the congregation: 'Now we are a happy family.'

Mrs Prema from Zion Nagar recalled that her small, thatched house had left her family at danger from attack by poisonous snakes. She said: 'The self-help group ... helped me to build a new house that now saves us from all dangers.'

Later in the day the General visited some Salvation Army institutions in Nagercoil. She dedicated to God the new boys' home building, telling residents that the home is special because of them.

At the training college the General spoke of how the power of the world differs from the power of love. She challenged the cadets to take care of the people who are entrusted to them.

In the evening the General visited Catherine Booth Hospital. She praised the staff for their 'gentle and compassionate touch for the sick'.

The General visited each department, showing appreciation for the hospital's work. She said: 'We don’t do this just because of money; we do this because of the love of God.'

This release is available through the News section of www.salvationist.org.

Images: General meets members of the congregation (top), and The General meets children of training college staff (bottom).
More images from the visit are available from The Salvation Army IHQ on Flickr.