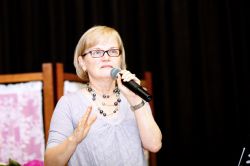 Commissioner Sue Swanson, World President of Women's Ministries, was guest speaker at the Australia Eastern Territory's 'Captivated' women's conferences, held in Brisbane (February 10-12) and Sydney (February 17-19). Both conferences took the theme She Chose to Arise and at each there was an atmosphere of gratitude – for forgiveness, for freedom and for the strength and gentleness of God's enabling love.

Commissioner Swanson opened each conference with a warm, humorous yet challenging session entitled 'Uprisings on my Journey'. She shared about her childhood, people who had influenced her life (and still do), and her personal journey to repentance.

Additional guest speakers at both locations included Karen Sagala who, with her husband, Alona, and their three children, serves as an 'urban missionary' with The Salvation Army in Carole Park, Queensland. Magda Ackad, from Middle Eastern Christian Outreach (MECO), presented a challenging and thought-provoking roleplay based on real stories of some Muslim women living in Australia. Magda's passion and enthusiasm were contagious as she shared practical ways and insights on how to present Christ cross-culturally.

Powerful testimonies at both conferences also gave glory and gratitude to the love, grace, and transforming power of God in some of life's darkest circumstances.

Commissioner Swanson continued the theme of arising during her second session, focusing on Moses' sister, Miriam. Reading from Exodus 2, the commissioner spoke about the young Miriam's choice to rise up with courage to speak to Pharaoh's daughter on behalf of her baby brother. 'God is not named here, but we can see him at work,' she said. 'Courage doesn't mean we're not afraid. It means, in spite of being afraid, we stand up.'

She also discussed Numbers 12, where Miriam faced some challenges and chose to rise up against her brother. The Lord's response was to make Miriam leprous, and to confine her outside the camp for a week.

Commissioner Swanson emphasised the Lord's delight in healing Miriam and bringing her back into the camp and into his presence. She challenged the women to think deeply about their own lives. 'Wherever you are and whatever you're doing, is God calling you to rise in courage?' she asked the audience. 'Are you spiritually leprous and in need of God's forgiveness?'

Many women responded to the call and went forward to the mercy seat for prayer.

Captain Tracy Robinson (New Zealand, Fiji and Tonga Territory) led 'Beautifully Arising' on the Saturday evening of both conferences. Hilarious, warm, challenging and encouraging moments captivated the audience as the captain showed the women how to recognise and accept their body shape and work with different styles to wear what looks best on them.

'It's not about dress size, it's about body shape and what looks good,' said the captain, former Visual Director for fashionable clothing company Esprit NZ. 'We are created in God's image and he created us beautifully. We are beautiful to the Lord.'

In her final session, Commissioner Swanson based her message on Exodus 35 and 36 – Moses building the tabernacle in the middle of the community so God's name would be honoured and his presence felt.

'This is not just something that happened back then,' she explained. 'It is a picture for us today of Jesus coming and living within our hearts. Christ is the centre of who we are and he wants us to surrender a willing heart to him.'

Both conferences concluded with women arising and responding to God, knowing they were in his presence and had been strengthened, encouraged and equipped to continue to journey.