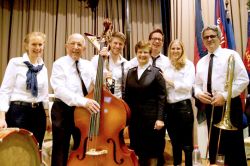 Six Salvationists from Switzerland are preparing for the experience of a lifetime in Malmö, Sweden, where they will represent their country in the Eurovision Song Contest. Michel Sterckx, Christoph Jakob, Jonas Gygax, Sarah Breiter, Emil Ramsauer and Katharina Hauri – known collectively as Takasa – will take to the stage for the semi-final on Thursday 16 May, hoping that voters from across Europe will put them – and their song, 'You and Me' – into the final two days later.

Much has happened since the group won the support of the Swiss public in December 2012. Then it was called Heilsarmee (German for The Salvation Army) and the stage outfits were variations on Salvation Army uniform. Rules laid down by the Eurovision Song Contest organisers meant that this was not allowed so the group name was changed to Takasa, meaning 'to make pure' in Swahili. It also happens to be the initials of The Artists Known As Salvation Army!

The uniform has been replaced by a look that is still identifiable with The Salvation Army – dark blue trousers and ties with white shirts bearing the logo (used by The Salvation Army in The Netherlands) 'Together We're One'. This choice was made before the theme was announced for this year's Eurovision Song Contest: 'We Are One'!

The group's website (www.takasa.ch) says that Takasa is 'made up of six individuals for whom music is a passion. Sarah is 21 years young, and Emil celebrated his 95th birthday in February. They are brought together by a shared love of music and belief in God.' Emil will be the oldest-ever contestant to take to the Eurovision stage.

The semi-final will see Takasa go up against songs from 16 other countries, each of which hopes to be in the top 10 and through to the final. The other countries are (in order of performance) Latvia, San Marino, Former Yugoslav Republic of Macedonia, Azerbaijan, Finland, Malta, Bulgaria, Iceland, Greece, Israel, Armenia, Hungary, Norway, Albania, Georgia and Romania. The Swiss entry has been drawn to appear in the penultimate spot – usually a good sign for being remembered and gaining votes! Only voters from the participating countries can take part in choosing who will go through – along with viewers from France, Germany and Spain (countries that are already through to the final).

Salvationists and friends from around the world will have the opportunity to share in the excitement together by going to a special page on the International Headquarters website. Go to sar.my/eurovision for the latest news, information about Takasa and photographs. More content will be added as it becomes available. While on the page, a click on the 'show your support' link brings up a variety of ways to support the group, from focused prayer to using social media.

On the evening of the semi-final, the sar.my/eurovision page will include live streaming of the event with opportunity to add comments and words of support. Salvationists and friends from across the world are encouraged to join in, vote if you can and let your friends and neighbours know that The Salvation Army is doing new things in God's name.

Martin Künzi (Chief Marketing Officer for The Salvation Army's Switzerland, Austria and Hungary Territory) says the endeavour has created a 'great interest in the Army ... not just in Switzerland, but internationally. Many doors have opened to speak about the Army and the gospel.'