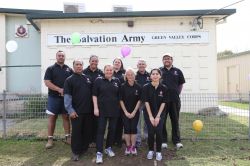 Volunteers at the 2168 Food 4 Life Market are all local residents and will help the run the innovative low-cost service. (Photo: Lauren Martin)

The Salvation Army has built on the success of its Food 4 Life Market by opening another service in the south-western Sydney suburb of Busby.

The 2168 Food 4 Life Market and People’s Shed was officially opened on Saturday 31 August. Dozens of people attended the opening to celebrate and sign up for the service.

The market is modelled on the successful Warwick Farm Food 4 Life Market, which has been operating for five years. Both are oversighted by the Army’s Greater Liverpool Corps.

“We’re looking to see this project make a significant impact, a positive impact and create a sense of community, inclusiveness and value as well as helping to break the problems of food insecurity, poverty and social isolation,” said 2168 Food 4 Life and People’s Shed manager, Joel Spicer, at the opening.

The World Health Organisation defines food security as existing “when all people at all times have access to sufficient, safe, nutritious food to maintain a healthy and active life”.

“Unfortunately, food insecurity affects a wide range of people across our community,” said Liverpool councillor, Mazhar Hadid, who was one of a number of dignitaries to speak at the opening.

The 2168 Food 4 Life Market aims to address this “insecurity” by providing affordable, nutritious food and educating the community on budgeting and food preparation. Those who become members of the market can attend once a week and, for $15, fill a large bag with fresh food and pantry items worth an estimated supermarket value of $60.

“Things are getting dearer every week so this will make things a lot easier,” said Peter, a local pensioner who signed up for the market on opening day.

The facility will also house a men’s and people’s shed where The Salvation Army and partnering organisations will run programs, vocational education, and create a place of care and support for members of the surrounding community.

“Today, friends, I dedicate 2168 as a place for the community, a meeting place, a place of connection, a place of hope, a place of help,” prayed The Salvation Army’s Australia Eastern Territorial Commander, Commissioner James Condon, as he officially opened the facility.