Walking against the trafficking of women 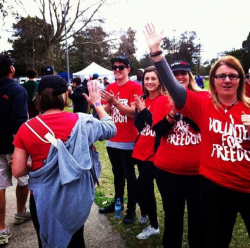 Volunteers brave the cold to Walk for Freedom. (Credit: Photo by Lynne Mitchell).

Lynne Mitchell, a community ambassador for the safe house, helped organise the ‘Hunter Walk for Freedom’, which took place in Newcastle on 3 May.

“Australia is becoming a popular trafficking destination,” says Mrs Mitchell. “It was shocking for me to learn it was happening on our shores. It’s pretty awful to think that in our own place, just down the road, horrific things are happening.”

“A bed in the safe house costs $30,000 a year. Our ultimate goal is to be able to support one more bed for one person, and to have a walk Australia-wide each year.”

It is estimated that thousands of people are trafficked into Australia each year. Once arriving in Australia on work visas, their passports are confiscated and they are often drugged and sold into prostitution rings, marriages, or forced to work in menial jobs for little pay.

Of those lucky enough to escape, the safe house aims to rehabilitate and reconnect these people with their families. The home is the only one of its kind in Australia.

“There are different forms and different levels of trafficking. The United Nations calls it ‘modern day slavery’,” says Mrs Mitchell. “Until a year ago, forced marriages and being underpaid wasn't really illegal. With the help of The Salvation Army, these laws have now changed.”

With hundreds of sponsored walkers stepping out on the chilly Saturday morning, Mrs Mitchell says the event was a great success. Donations are still coming in and the walk has increased awareness of trafficking in Australia.

The Hunter Walk for Freedom was started by a group of five women who were shocked at hearing that women today are still being sold and trafficked.

The walk is in its fourth year and is now organised by Northlakes Salvation Army. In that time, the event has raised $30,000 to support anti-trafficking organisations, including The Salvation Army Safe House.

A festival atmosphere prevailed on Saturday, with live music, fair trade and food stalls, and their own water label for sale, ‘Freedom Water’.