Oliver on par with new hobby 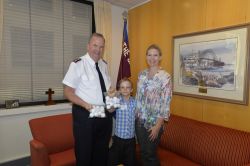 Commissioner James Condon meets young Oliver, and his mother Fiona, to congratulate him on his golf-ball fundraising initiative.

Eight-year-old Oliver has recently picked up a new but unusual hobby. In addition to his chess, tennis and soccer interests, one of Oliver’s favourite activities is to raise money for The Salvation Army.

While eating breakfast with his family one morning, Oliver read The Salvation Army’s Wishes catalogue – a gift catalogue that raises funds for those in need at Christmas – and discovered that not all children enjoyed the same morning ritual. “I felt touched that some people don’t get breakfast before school,” he said.

Oliver was initially saddened, but then decided to take action with a novel idea. He enlisted the help of his family to search for “lost” golf balls in a parkland area near Manly Dam on Sydney's northern beaches. Wakehurst Golf Course is close by. Oliver's plan is to purchase “School-Day Breakfast” packages in the Wishes catalogue, which sell for $16 each.

Oliver has collected about 200 golfs balls so far. He cleans each ball and sells them for $2 each. So far he has raised $50 and his intention is keep raising funds. “I was touched how he connected to people his own age and wanted to help,” said Oliver’s mum, Fiona.

A “School-Day Breakfast” package for kids is just one of the many items available in The Salvation Army Wishes catalogue. If you are inspired by Oliver’s actions and would like to help disadvantaged children, families and individuals at Christmas, go to salvos.org.au to donate.